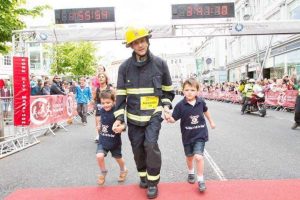 First marathon: Ran Cork in 2014 Did so in full fire gear for charity breaking the Guinness world record in a time of 3.41.10  The support was amazing & what I didn’t know then was that was only the beginning & opened the door to running more marathons & longer ultras events.

Favourite Marathon: Cork is very special being my first marathon & is hard to beat having something for everyone & being very accessible to supporters to cheer you on. Having a Full, Half & Relay there’s a challenge for everyone.

How many marathons have I’ve run?       Lots, I guess I got a bit hooked. One challenge saw me run 32 marathons running in 32 counties in 15 & 1/2 days for charity so plenty of experience at pacing and digging deep to achieve a goal.

Marathon advice:        Join a club and train with friends if possible. Training builds confidence and improves ability. Set realistic goals. Train in the kit you will run in & practice taking drinks don’t over hydrate.

Proudest moment:        Representing Ireland in European and World Championships at 100km & 24hr. I am sure In time I will change this to running Cork Marathon with my children. 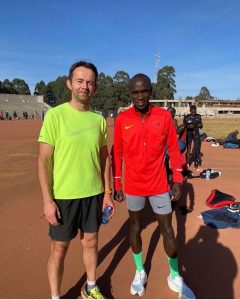 I completed Cork in 2011 in under 4 hours and decided that was enough for me and continued playing soccer until it was time to retire.

I started back running in 2015 when I turned the Big 40 and took part in the Limerick marathon and got hooked. A goal of 4 marathons for my 40th year was set and I haven’t stopped since.

Overall I have competed in 20 marathons to date with 4 of them sub 3 with the latest being in Berlin 2021 in 2hrs 49mins.

My favourite is between Manchester and Rotterdam as the crowds in Rotterdam are everywhere on the course.

My biggest achievement so far is not in the world of running but I was the youngest player to play for the Irish Junior soccer team at 17 years of age. It was even better that it was in my home town of Sligo.

Earlier this year I spent two weeks in Kenya training at altitude trying to learn how the Kenyans train so well. Its an amazing simple life and they really follow the motto of “Train, eat, sleep repeat”. 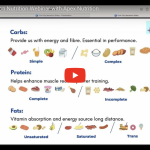 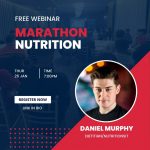 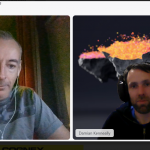 Cork City Marathon x Runners Diary Podcast Partnership Announcement
We use cookies on our website to give you the most relevant experience by remembering your preferences and repeat visits. By clicking “Accept All”, you consent to the use of ALL the cookies. However, you may visit "Cookie Settings" to provide a controlled consent.
Cookie SettingsAccept All
Manage consent

This website uses cookies to improve your experience while you navigate through the website. Out of these, the cookies that are categorized as necessary are stored on your browser as they are essential for the working of basic functionalities of the website. We also use third-party cookies that help us analyze and understand how you use this website. These cookies will be stored in your browser only with your consent. You also have the option to opt-out of these cookies. But opting out of some of these cookies may affect your browsing experience.
Necessary Always Enabled
Necessary cookies are absolutely essential for the website to function properly. These cookies ensure basic functionalities and security features of the website, anonymously.
Functional
Functional cookies help to perform certain functionalities like sharing the content of the website on social media platforms, collect feedbacks, and other third-party features.
Performance
Performance cookies are used to understand and analyze the key performance indexes of the website which helps in delivering a better user experience for the visitors.
Analytics
Analytical cookies are used to understand how visitors interact with the website. These cookies help provide information on metrics the number of visitors, bounce rate, traffic source, etc.
Advertisement
Advertisement cookies are used to provide visitors with relevant ads and marketing campaigns. These cookies track visitors across websites and collect information to provide customized ads.
Others
Other uncategorized cookies are those that are being analyzed and have not been classified into a category as yet.
SAVE & ACCEPT
Powered by